John Mason emailed this to me this morning and I just had to copy it to my blog.

Here are some important questions to ask yourself today.

I love John Mason’s wealth of wisdom. He is the author of  An Enemy Called Average and other amazing books that are a must for your personal library.

Have a great day.

The Golden Retriever is a breed of dog. They were historically developed as gundogs to retrieve shot waterfowl such as ducks and upland game birds during hunting and shooting parties.[1] As such they were bred to have a soft mouth to retrieve game undamaged and have an instinctive love of water. The golden retriever has a dense inner coat that provides them with adequate warmth. The outer coat is sleek and water repellent, and lays flat against the body. The official color of the breed is the varying shades of gold that are most often seen.[2]

The breed’s intelligence and versatility suit the dogs well for a variety of roles including guide dog for the blind, hearing dog for deaf people, hunting dog, illegal drug detector, and search and rescue participant. Because of their loyal and gentle temperament, golden retrievers are also popular family pets.[3]

Lewis and Clark are of the English breed.

Here are a few pics from November. The pups are now 8 months old and Lewis is 80 lbs and Clark is pushing 90 Lbs. 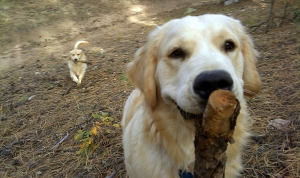 This pic was taken by my cell phone …I gotta get a Kate Phone.

I love this cell phone pic of Lewis loving and flying through  the Prescott National Forest in the pines.

Lewis resting on one of out favorite trails here in Preskitt. 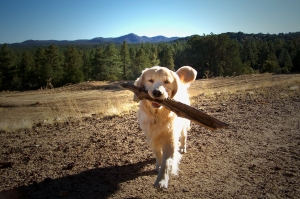 Lewis retrieving …he loves being outside.

The pups have started  competing for the same stick just this month….We are running out of sticks in this weak economy so they are sharing. Any stimulus money for some for sticks?

Pups love “The Pines”…we go there almost every night to let her rip.

November here in Zona the days are getting shorter so our walk turns into more like a run.

Yes, they are some of our best friends.