The 2008 Tour de France is the 95th Tour de France. The event is currently taking place from July 5 to July 27, 2008. Starting in the French city of Brest, the tour will enter Italy on the 15th stage and return to France during the 16th, heading for Paris, its regular final destination, which will be reached in the 21st stage.

Over the past few days I have been watching a six disc dvd set of the amazing 2005 Tour De France in which most people know that Lance Armstrong won his 7th Tour De France race.

While watching the dvds, I kept seeing another American  riding in the pack up front with Lance.  The rider was Floyd Landis who ended up placing first in the 2006 Tour De France, but later was stripped of his title due to a high testosterone/epitestosterone ratio after stage 17 .

This past April during the 2008 Whiskey off road mountain bike endurance race, I was able to meet two great bike riders.

On Saturday night I met and shook hands with Floyd Landis at the awards ceremony in which Floyd was awarded 3rd place at this years 50 mile level.

Floyd is pictured in the front row middle 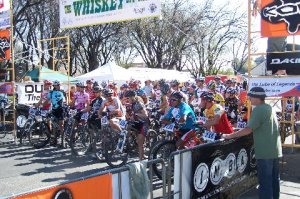 Another great bike rider I was able to speak with Friday night at our orientation was Nat Ross.

I purchased a mountain bike from Nat this past Spring.

It was great to be able to speak with one of the top mountain bike competitors in the country.

Thanks to Steve and Cindy at High Gear Bike Shop for the twelve hours of inspiration.

The DVD’s are great!