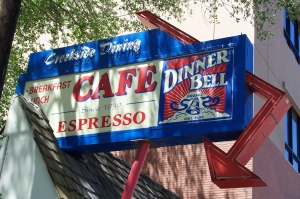 As a child growing up in Iowa, I was in the woods as much as possible.

Every moment possible was filled with exploring, camping, looking for arrow heads, sponge mushrooms or anything else “the woods” allowed us to do or become.

There was one thing that my brother Gary  and I could usually count on every evening after playing as hard as we could. We always knew that just before dark we would hear dad’s famous whistle.

Yep, dad had the loudest whistle of anyone in the Quad Cities….. Even to this day I have not heard anyone whistle louder than  dad.

When he would whistle, we would not hesitate or argue…..it was dinner time and we headed home for another of mom’s awesome meals around the table.

Well this weekend Gary and I won’t be playing in the woods, and dad’s whistle although loud, cannot be heard from Scottsdale.

We will be headed for another table called the Dinner Bell.

Really looking forward to one of the best little local creekside eateries in Prescott with Gary, Caleb and whoever else is fortunate enough to go with us.

The Dinner Bell has a split personality. Up front there’s a classic old diner that’s been in business since 1939, while in back there’s a colorful modern space with walls that roll up. The creekside setting a block off Whiskey Row makes this a great little hideaway for a casual meal and some “third place time”.

I think I’ll have the fette greek omlete…yes, yes I will.

I hear the DINNER BELL RINGING.