I love this picture of my brother Gary and I that was taken probably around 1965ish. 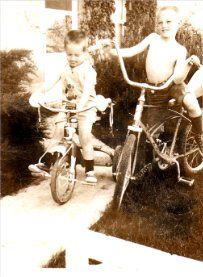 My first bike is a schwinn banana bike …..what a classic !

I’m not sure what Gary was driving at the time but I am sure of this, His little legs were always moving as fast as he could move them to always try to keep up with his big brother.

We built a race track and we would have bike races in the woods behind our house in the hot summer sun in Iowa.

It wasn’t about winning….it was about trying to win.

Thinking about those days reminds me of a story I heard a couple of years ago from National Geographic.

It has to do with not just racing, but finishing the race.

One of the most grueling of all bicycle races is the Tour De France. A contestant in that event, Gilbert Duclos-Lassalle, describes it in a National Geographic article titled, “An Annual Madness.” The race covers about 2000 miles, including some of France’s most difficult, mountainous terrain. Eating and drinking is done on the run. And there are extremes of heat and cold. To train for the event, Lassalle rides his bicycle 22,000 miles a year. What kind of prize makes people endure so much hardship and pain! $10,000? $100,000? No. It’s just a special winner’s jersey. What then motivates the contestants? Lassalle sums it up: “Why, to sweep through the Arc de Triomphe on the last day. To be able to say you finished the Tour de France.”

Now some 40 years later, Gary and I are still racing at break neck speeds everyday we wake up to accomplish the things God has purposed us to accomplish with our lives on this earth.

I dedicate this blog to the BIGGEST LITTLE BROTHER on the planet. He is a true inspiration. He is someone I learn to love and appreciate more as time passes. He is a true competitor with life and to runs the race set before him with great desire, determination and dignity.

He has been like that since the beginning of our back woods bike races back in Iowa.

One thought on “ORIGINS pt. 3”