Just wanted to post a note about my night with Tash this past week when we went to see U2 at the University of Phoenix stadium in Phoenix.

I just gotta say the event was above my expectation. 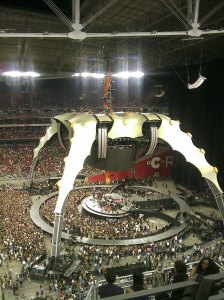 The “space ship”  was a stage designed to create a more intimate setting between the band and the masses. Bono captured the goal perfectly.

Interesting note about the “spirituality” of  the band can be found at the following link.

It is amazing to me that these Welsh born guys were raised in the same place where one of the greatest move’s of God happened on the moderen planet.

As he knelt on the stage,  Bono ask the concert goers to pray with him for the release of  political prisoners around the world. He also sang a “Bono” redintion of Amazing Grace.

The night with Tash was a blast to remember. The Sound system rocked and the message was one of hope and a future for humanity.